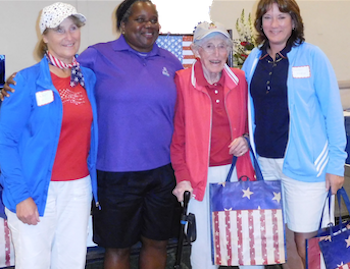 Golfers began the day with a breakfast on the Rancho Bernardo Inn patio, then proceeded to their starting-hole assignments for an 8 a.m. shotgun start. After the round, players gathered in the Bernardo Room for a lunch of watercress salad with jicama, shaved vegetables and pomegranate vinaigrette; guava honey-glazed chicken breast with grilled pineapple and chili salsa; wasabi mashed potatoes; baby carrots; and crème brulee with fresh raspberries and blackberries.