The golfers shouted, “What a fun way to begin a tournament!” as they departed the cart-staging area at the 2017 Rancho Bernardo Inn Women’s Golf Club Invitational, accompanied by music from the sixties and bubbles from a bubble machine. The tournament, which drew a full field of 144 players, was held on May 10 at Rancho Bernardo Inn. 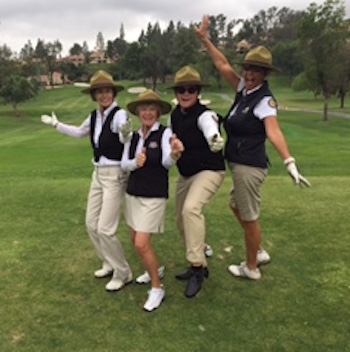 In keeping with the Invitational theme, “America the beautiful: Celebrating the national parks coast to coast,” colorful signs of national parks were posted at each tee box, and a prize was awarded for the most creative team “costume.”

Golfers began their early day with a continental breakfast on the Rancho Bernardo Inn patio and then proceeded to their starting-hole assignments for an 8 a.m. shotgun start. After the round, players gathered in the Santiago Room for a lunch of watercress salad with jicama, shaved vegetables and pomegranate vinaigrette; guava honey-glazed chicken breast with grilled pineapple and chili salsa; wasabi mashed potatoes; baby carrots; and crème brulee with fresh raspberries and blackberries.