As the golfers prepared to caravan out to their starting tee assignments, the upbeat sounds of Hakuna Matata wafted over the cart-staging area. The title of the award-winning song from The Lion King means “no worries” – a message well-suited, perhaps, to participants in a daylong golfing safari. 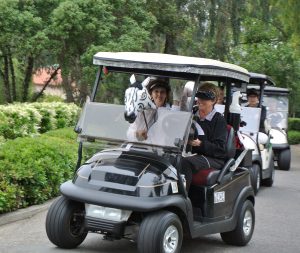 ZEBRA POWER – In keeping with the Invitational theme, “Swingin’ Safari,” RBIWGC member Karen Stelman and playing partner Jan Higley share a laugh in their zebra-powered cart on the way to their starting tee assignment. (Photo by Harry Maxfield)

“The RBIWGC continued its proud tradition of treating Invitational participants to a classy, fun event, where players and hosts could shine,” said Romona Smith, Club president. “Led by Chairwoman Angela Schmidt, our ‘Swingin’ Safari’ theme provided numerous creative opportunities for the tournament. It was truly gratifying to see so many Club members and golfers embrace this event.”

Golfers began their early day with a continental breakfast on the Rancho Bernardo Inn patio and then proceeded to their starting tee assignments for an 8 a.m. shotgun start. After the round, players gathered in the Bernardo Ballroom for a three-course gourmet luncheon.

CARTS IN MOTION — Participants in the 2019 RBIWGC Invitational caravan out to their starting tee assignments. The May 14 tournament drew a full field of amateur women golfers from across Southern California. (Video by Maria Chavez)