Pearl, a longtime resident of Rancho Bernardo, celebrated her centennial birthday on May 26. She has been a member of RBIWGC since 1991 and served as its president in 1996. 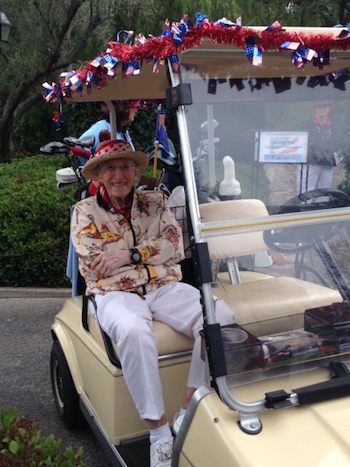 RBIWGC’s CENTENARIAN GOLFER — Gene Pearl awaits the start of play at the 2016 RBIWGC Invitational on May 17. (Photo by Melody Kincade)

At a luncheon honoring its most senior member on May 31, the Club invited Mark Kersey, Fifth District City Council member, to present the award, which proclaimed May 31 as “Gene Pearl Day” in the City of San Diego. (See story, photo on Page 3 of Councilman Kersey’s June 16 newsletter.)

Pearl also is a charter member of the Veterans of Foreign Wars, Major Abraham J. Baum Post 7766, in Rancho Bernardo, which was founded in 1986, according to Post Commander Don Schmidt.

She served in the U.S. Army Nurse Corps in World War II and was a member of the 16th Evacuation Unit. In April 1943, just a few months after basic training with the Second U.S. Army Unit at Camp Blanding, Fla., her unit sailed to North Africa, where doctors and nurses treated wounded Germans and Italians in a prison camp. For their efforts, the unit’s medical personnel, including Pearl, received the Bronze Star.

Later that year, Pearl was among a group of U.S. Army nurses aboard the Newfoundland, a British hospital ship that had orders to deliver the nurses to Salerno Beaches, Italy. On Sept. 13, 1943, a German plane bombed the ship. Six of the 14 British nurses and all of the medical officers on board were killed. Before the Newfoundland sank, the ship’s crew helped get all 103 American nurses safely off the ship and into small rowboats. British vessels rescued them, and they arrived for duty in Italy 10 days later.

Pearl was one of 32,500 nurses to serve overseas during World War II. In all, more than 59,000 nurses served during the war, the largest group in history. For her service, she earned the rank of Captain.

After the war, she returned to her hometown of Chicago and enrolled in college; she received a bachelor of science degree in public health from Loyola of Chicago in the late 1940s. She later held nursing positions in Phoenix, Los Angeles and San Diego and retired in the mid-1970s.

“Gene is a dedicated golfer and an inspiration to us all,” said Melissa McBratney, RBIWGC president. “We are proud that she is a member and former president of our Club, and we salute her as she celebrates her 100th birthday.”