The tournament drew a full field of 144 golfers on a cloudy, windy day. The gloomy weather was no match, however, for the excitement and energy of the 36 foursomes as they caravanned out to their starting tee assignments. 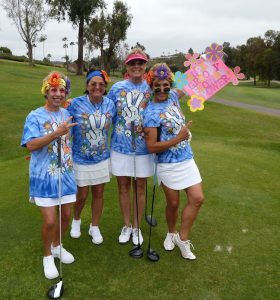 In keeping with the Invitational theme, “America the beautiful: Celebrating state flowers across the nation,” a variety of floral arrangements dotted the course – at tee boxes, on the patio fireplace at breakfast and on the tables at lunch. A prize was awarded for the most creative team “costume” in keeping with the flower theme. (See photo at left).

Golfers began their early day with a continental breakfast on the Rancho Bernardo Inn patio and then proceeded to their starting tee assignments for an 8 a.m. shotgun start. After the round, players gathered in the Bernardo Room for a three-course gourmet luncheon.

The Rancho Bernardo Inn Women’s Golf Club was founded in 1963. The first Invitational was held in spring 1964 and has since grown into one of the premier women’s golfing events in San Diego County. (For more on the Club’s history, please click here.)