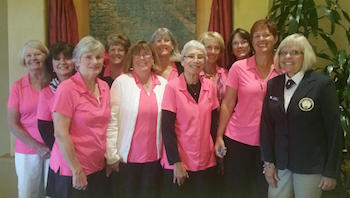 Team play is match-play competition between clubs in San Diego, Orange and Riverside counties that are members of the San Diego County Women’s Golf Association. Each club may field up to four teams of 14 players each, eight of whom will play in any given match. Teams compete for both gross and net points in divisions determined by the SDCWGA.

SDCWGA is a non-profit organization, founded in 1934 to promote and conduct competitive golf for women golfers.