The 96 players at RBI were among more than 1,300 juniors, representing 56 countries and 42 states, who participated in the weeklong tournament at golf courses throughout San Diego County. 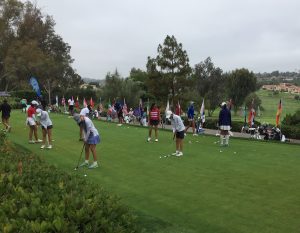 A GLOBAL FIELD — International flags line the RBI putting green as girls practice before the second round of the Junior World Championships on July 10. (Photo by Diane Borden)

“It was an absolute privilege to host this prestigious international event,” said Peter Wininger, director of golf at RBI. “Our course was in perfect shape, thanks to our course superintendent Chris Hayman and his team. These are the best 11- to 12-year-old girls in the world, and the scores they were able to achieve were remarkable.”

Over the three days of competition at RBI, the field posted an average score of 80.07, according to tournament organizers. The young golfers scored seven eagles and 520 birdies; the lowest round posted was a 65 and the highest a 110; and the division champion shot 15 under par for the three rounds.

“These girls were amazing to watch,” said Cretia Hadley, a new member of the Rancho Bernardo Inn Women’s Golf Club, who has served as a volunteer at the championships for the last five years. “So many played under par.”

“By the third day,” she added, “many of the girls had become friends and were exchanging ball markers and contact information and taking photos. They were all such great sports.”

The San Diego Junior Golf Association hosted the first Junior World Championships in 1968. The organizers sought to host a tournament in which “juniors from all over the world could come together to play golf and share in cultural exchange.”