Rancho Bernardo Inn Women’s Golf Club’s Team No. 1 earned the Net Championship title in regional team play this year. The team’s four-month season ended successfully on May 22 and 26 with wins over Temecula Creek Inn and The Vineyard, respectively, in the round-robin net-team playoffs.

During the regular season, the RBIWGC team won its division over teams from Mission Trails, Steele Canyon, Coronado No. 2, Carlton Oaks and Cottonwood. The RBI team tallied net-point wins in eight of its 10 matches to earn a spot in the playoffs. 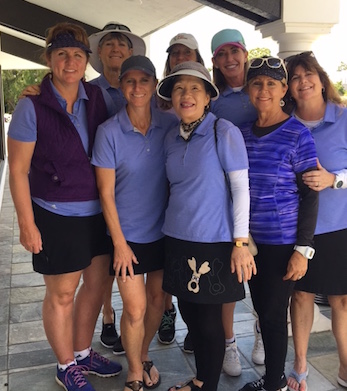 “Our team competed strongly each week this season,” said Captain Caroline Dixon. “We played 10 matches in the regular season, plus two matches in the playoffs, to win. Each of the team’s 14 players contributed – and we had a lot of fun, as well.”

The San Diego County Women’s Golf Association sponsors team match-play competitions each year for teams from San Diego, Orange and Riverside counties. The SDCWGA places each team in a division, and teams tallying the highest accumulated points in each division, plus playoffs, earn gross and net championships. Sixteen teams competed in three divisions this year. They were: